A proposal was unveiled yesterday for a Weta Workshop-designed rugby-themed sculpture to grace the city, somewhere, In Time For The Rugby World Cup. 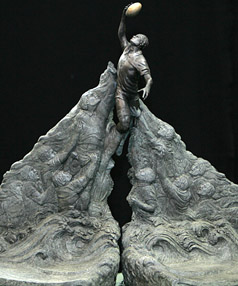 The sculpture is highly symbolic, with the DomPost providing a list of all the symbolism, but what does the sculpture most resemble?